Langtang Trekking in Nepal takes you into a wonderful journey inside one of the discreet Himalaya regions of Nepal which caters all kinds of trekkers. The Langtang valley in Nepal shares borders with Tibet in the north; hence, the region is highly influenced by the lifestyle, culture, and tradition of its northern counterpart. It is home to Langtang National park and a popular pilgrimage site of Gosainkunda. Langtang Lirung (7,227m), Langtang Ri (7205m), and Yala Peak (5,50m) are few of the mountains located entirely inside the National Park and are also available for the grand audience during trekking in Langtang valley.

The 11-days Langtang Region trekking begins at Kathmandu. Followed by a full-day tour of Kathmandu valley, you’ll embark on a road journey towards Sybrubensi. The Langtang trekking itinerary begins at the small hill-town of Sybrubensi. The arduous trail slowly ascends through the hills and towards the mountains. You’ll pass through Lama Hotel and enter Langtang village. You’ll trek up to Kyanjin Gompa (3870m) and embark on a hike of the local peak of Kyanjin Ri (4773m) before descending. During the descent, you’ll retrace the same path back to Sybrubensi via Langtang village and Lama Hotel. The indigenous Tamang tribe is the major inhabitants of the region. You will get to witness the greater Tamang lifestyle with a flavour of Tibetan culture. The pristine Langtang National Park is home to much exotic wildlife including Himalayan black bear, Himalayan Thar, and Rhesus monkey, and the rare species of Red Panda and Snow Leopard. The best time for trekking in Langtang Valley is during the spring (March-June) and autumn (September-November) season.

Frolic Adventure has been specializing in treks around Nepal since the last two decades. We conduct all sorts of trekking to Langtang. You can choose from the private, couple, to group treks at a reasonable rate. Langtang region trekking cost covers entire transportation inside the country, three meals a day, an experienced guide, porter, permits, and other essential logistics.

The trip officially begins at Kathmandu upon your arrival. A representative of Frolic Adventure will greet you at the airport and bring you to your hotel. After the complete orientation of the trek, you can choose to relax at the hotel or go out to take a stroll around the market. Overnight stay at a hotel in Kathmandu.

After an early morning breakfast, you’ll embark on a short road journey to the north of Kathmandu. You’ll drive all the way up to Syabrubeshi’s, a small town 49.6km north of Kathmandu. It goes along Trishuli River through the lush green forests. Once at Sybrubensi, you can relax at the hotel or take a short stroll around the town. Overnight stay at Sybrubensi.

After a hearty breakfast, you'll begin the trek. The initial trek takes you through the lush forest towards Bamboo village. After a brief stopover for the lunch, you’ll resume the trek and ascend through the Bamboo forest to Lama Hotel. Unlike the name, Lama Hotel is the name of the local village lying on the trail to Langtang. Overnight stay at the Lama Hotel.

You’ll start the trek from Lama Hotel and pass through the thick rhododendron and pine forest en route to Ghodatabela. After a brief stopover for lunch, you’ll resume the trek. You’ll pass through many small settlements before making your way into Langtang valley. The gigantic Langtang Lirung (7227m) will be visible up north of the valley. Few hours from here, you’ll arrive at the Langtang village. Overnight stay at Langtang Village.

The Langtang village was completely destroyed in the major earthquake of 2015. Today, the lodges have reopened for the incoming tourists. You’ll leave Langtang Village trek for few hours towards Kyanjin Gompa, a high-altitude destination popular for an age-old Buddhist monastery and a local Yak Cheese factory. From the vantage point of Kyanjin Gompa, you can get the beautiful views of Gangchempo and Langtang Lirung peaks. Overnight stay at Kyanjin Gompa.

Day 07:Rest day at Kyanjin Gompa and explore day for the day hike.

Today, you’ll explore the surroundings of Kyanjin Gompa along with a pleasurable hike of the nearby Kyanjin Ri peak (4773m). The uphill hike will offer you some great scenery. From the top, you can get the 360 degree of the entire valley and the nearby mountains. After hiking Kyanjin Ri, you’ll head back to Kyanjin Gompa for the overnight stay.

From Kyanjin Gompa, you’ll make your way back down to Lama Hotel. You’ll retrace the same path through the Langtang village towards Lama Hotel and pass through numerous small settlements and lush rhododendron forest. The trails Langtang trekking route offers stays for plenty of wildlife and vegetation. Overnight stay at the Lama Hotel.

From Lama Hotel, you’ll head back down to Sybrubensi through Bamboo village. The trail passes through the rocky terrain with bamboo forests on both sides. The downhill hike will be pleasant and you can bid relish the scenery for the last time in the Langtang trekking route. Once at Sybrubensi, you can celebrate with your staff and colleagues and enjoy the completion of the trek. Overnight stay at Sybrubensi.

Day 10:Drive back to Kathmandu. Farewell dinner with Frolic Adventure.

Today, you’ll catch your commute back to Kathmandu. The road journey goes through the same path back to Kathmandu. Once at Kathmandu, you can take a stroll around Thamel, the major tourist destination of Kathmandu. You can also do some souvenir shopping to take back home. The evening will be well spent having a Nepali dinner. Overnight stay at a hotel in Kathmandu.

Day 11:Departure to the international airport for your final flight.

Today is your last day in Nepal. Our officer will come to meet you at the hotel to escort you to Kathmandu International Airport for your flight home. 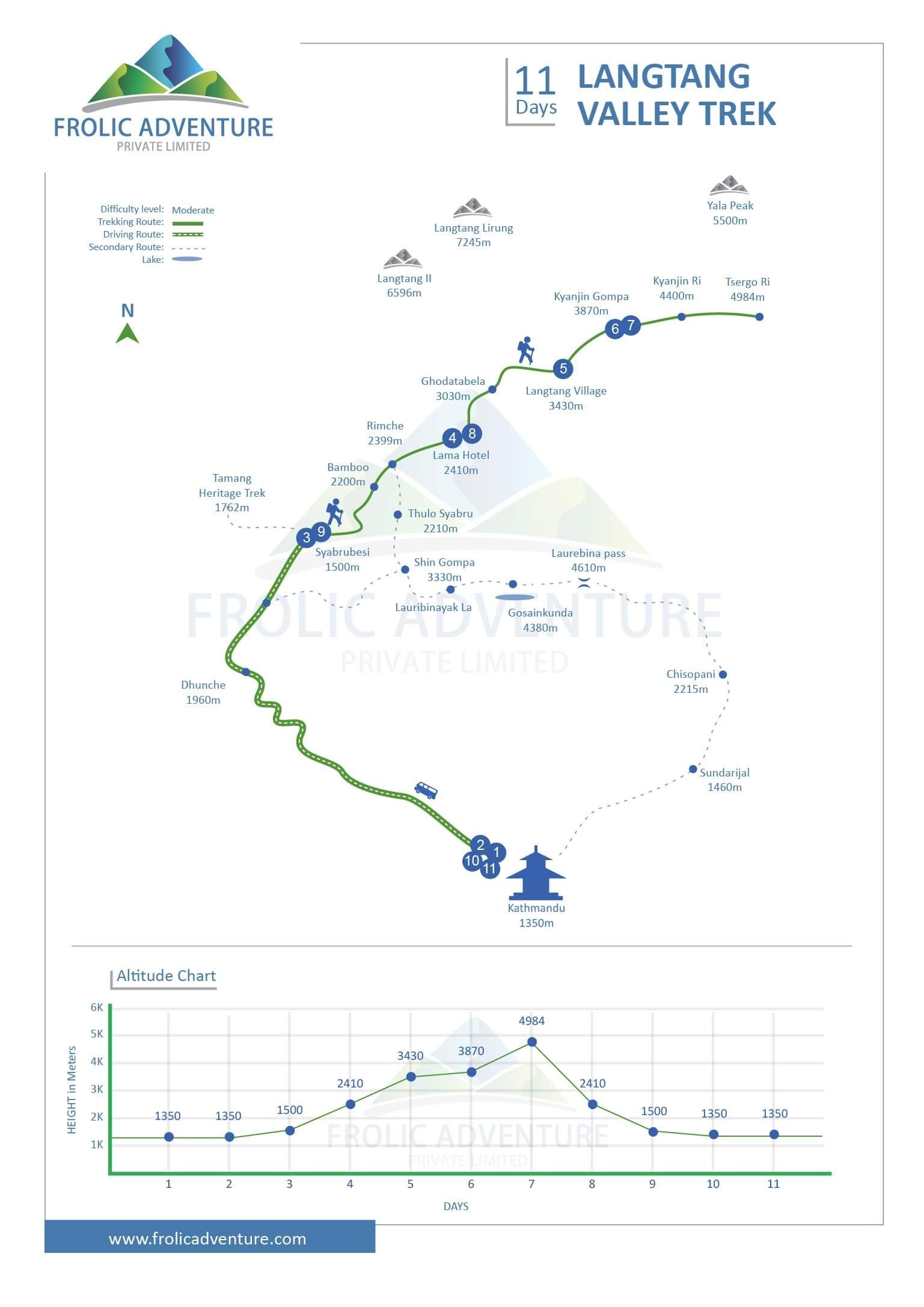