One of the most sought-after treks in Nepal, the Annapurna Circuit Trek encircles the entire Annapurna massif, resembling the Buddhist circumambulation. Also called the Around Annapurna Trek, it comprises a visit to the biggest pass in the country, the holy shrine on the foothill of the mountains, and the deepest river gorge in the world just to offer a mere glimpse of the entire journey. Annapurna circuit trek map generally contains the hills of mid-western Nepal, mountain pass, arid landscape, rain-shadow area, and holy sites.

This 3 weeks long Annapurna Circuit trek begins at Kathmandu. While at Kathmandu, you’ll get to enjoy the cultural tour of the city. Afterward, you’ll drive to the town of Bhulbhule and begin the trek. At the initial stage, the trek passes through winding hill valleys and lush forests. Ngadi, Chamje, Bagarchhap, and Chame are a few of the populated villages you’ll pass through before reaching the higher-altitude villages of Pisang, Manang, and Yak Kharka. From here, you cross the highest pass of Thorung La (5416m). The trail opens to a desert-like landscape of Mustang Valley. The quick descend from the pass takes you directly to the holy site of Muktinath. Thousands of Hindu and Buddhist pilgrims visit the temple every year. It is considered one of the Mukti-Kshetra or ‘Destination for Salvation.’ The final stage of the trek takes you through the drylands of Mustang and back to the hills. You’ll cross Jomsom, Marpha, and Tatopani before heading back to the lush-forested trail of the Kali Gandaki gorge. A quick detour will take you to the Ghorepani trail and then Pokhara via Tikhedhunga. Annapurna Circuit trek season comprises of spring and autumn when weather is generally good.

Frolic Adventure has been specializing in customized trek packages in the country. You can also choose to join a fixed group to enjoy the trip at a reasonable rate. Annapurna Circuit trek cost covers entire transportation inside the country, three meals a day, an experienced guide, porter, permits, and other essential logistics.

Upon your arrival at Kathmandu Airport, our representative will warmly receive you and escort you to your hotel. After checking-in, you can choose to relax at the hotel or consider taking a stroll around the vicinity or market. Overnight stay at a hotel in Kathmandu.

Today, you’ll embark on a cultural journey of Kathmandu city. Kathmandu is a historical city with links to a variety of faiths and beliefs. The historical temples dating back to 500-700 years along with age-old temples and Buddhist stupas are the sites worth seeing. Kathmandu Durbar Square, Boudhanath, Swayambhunath and Pashupatinath are few of the major tourist destinations and UNESCO Heritage sites inside Kathmandu. Overnight stay at a hotel in Kathmandu.

Today, you’ll embark on a road journey to the west of Kathmandu. The journey to Bhulbhule goes along the Prithvi highway with the company of Trishuli River in the early stages and Marsayangdi on the latter one. Instead of driving until Besisahar, you’ll reach up to Bhulbhule via Khudi, which may take around 6-7 hours. From Bhulbhule, you begin the trek. The first day is more or less a warm-up as you walk up to Ngadi. Overnight stay at Ngadi.

From Ngadi, you’ll make your way northwards through the hills and lush forests to the village of Chamje. You cross Ngadi River and arrive at Bahundanda. Continuing ahead, you reach Ghermu Phant after passing several villages on the way. Further ahead, you reach Jagat after crossing Marsayangdi River and following the river, you finally reach Chamje. The trek may last 7hr with a good amount of uphill hike and altitude gain. Overnight stay at Chamje.

Today, you’ll begin from Chamje and take the rocky trail following the Marsayangdi River. You'll enter Tal which is the first village in the Manang district. From here on, you'll be tracing the trek trails inside Manang. The trail continues and goes through Dharapani. The village is more influenced by Tibetan-Buddhism. The short distance from Dharapani lies Bagarchhap, a typical Tibetan-Styled village with flat-roof houses. Overnight stay at Bagarchhap.

You’ll climb uphill and make your way towards Danakyu. You’ll continue through the forests and reach Koto. After a brief hike, you’ll reach Chame–the headquarters of the Manang district. From here, you can enjoy a quaint view of Annapurna II (7937m) along with the two small hot springs for relaxation. Overnight stay at Chame.

You’ll make your way through the deep forest into a steep and narrow valley. After crossing two long bridges, you’ll enjoy the view of the mighty Pangdi Danda rock face. Further ahead, you enter the Swargadwari region, which translates to ‘Gateway to Heaven in Nepali’. A short distance from here lies the Pisang village. Overnight stay at Pisang.

The trail here on is drier until the top. Also a rain-shadow area, you will less likely encounter any vegetation. The inhabitants of the region mostly breed yaks as the crop season lasts only a few months. Walking along the Marsayangdi River you’ll reach Munchi. From here, you’ll route towards Humde. The trail continues along the beautiful but partially hidden village of Braga which makes way to Manang. Overnight stay at Manang.

Today, you’ll spend the day acclimatizing at Manang valley. You will indulge in a short hike around the village and gain some altitude to prepare for the tougher part of the trek. The valley lies to Tibet in the north and has a history of yak herding and salt-trade with the neighbouring Tibet. Few of the surrounding mountains you’ll enjoy are Gangapurna (7454m), Tilicho Peak (7134m), and Thorung peak (6144m). Overnight stay at Manang.

Upward the Manang valley, you’ll cross a stream and climb towards Tengi village. From here, you’ll head out of Marsayangdi valley and northwest to Jharsang Khola valley. The trail continues northward and passes pastures and juniper trees. En route, you’ll reach the Ghunsang village, a typical Tibetan village with flat-mud roof houses and yak pastures. After crossing a small river, you’ll make your way up towards Yak Kharka. Overnight stay at Yak Kharka.

You’ll start the trek early as it’s essential to cross the Thorung La Pass before the weather becomes harsh on the latter part of the day. Today, you'll complete the Thorung La Pass (5416m) trek, the highest pass in the region. From the top, you can see a panorama of majestic Himalayan peaks lying inside Tibet. It also comprises the highest Annapurna circuit trek altitude. From the top, you'll make your way downwards towards the village of Muktinath. Muktinath is revered by both Hindus and Buddhists. You can explore the temple premise before checking-in at the lodge. Overnight stay at Muktinath.

Today, you’ll walk all the way down to Jomsom bazaar. You will get to see some interesting agricultural patterns on the way. The valley is covered by large rocky hills. You'll walk along the Kali Gandaki River towards Jomsom. Jomsom is the headquarters of Mustang district. After a brief stop, you'll make your way south towards the village of Marpha. Marpha boasts apple orchards which produce some of the finest apples in the entire country. The locals use the apple to make brandy which is sold around the world. Overnight stay at Marpha.

From Marpha, you'll make your way towards Kalopani. You will pass numerous monasteries as you begin the trek on this day. You can also explore the Rinjing and Solmi Gompa on the way. Kalopani is a small village which lies a few hours from Marpha. The settlement lies alongside the Kali Gandaki River. Overnight stay at Kalopani.

Today, you'll make your way towards Tatopani. Here on, you’ll start witnessing large expanse of green forests. Tatopani is named after its natural hot spring enjoyed by locals and tourists alike. The road is narrow and can be scary sometimes. You can choose to relax at the hot spring along with enjoying the local dishes. Overnight stay at Tatopani.

Today, you’ll start from Tatopani and further ahead trek to the village of Ghorepani. Ghorepani is a popular tourist site. It may require a good amount of uphill hike to reach the village. Once at Ghorepani, you can enjoy the close-up view of Annapurna massif, Machhapuchhre (6997m), and other surrounding mountains. The trail up northeast converges into the popular trek trail of Annapurna Base Camp.

In the morning, you’ll make a scenic hike to Poon Hill. Poon Hill is a tourist landmark which offers a beautiful view of the sunrise and sunset along with the up-close view of the surrounding mountains in the Annapurna region. After a brief hike, you’ll start descending toward the village of Tikhedhunga. The descent will be fairly easy and you pass through thickly spread settlements of Gurung communities along the way. Overnight stay at Tikhedhunga.

From Tikhedhunga, you'll make your way down to Nayapul which also serves as the starting point for Annapurna Base Camp trek. It's a short downhill hike. From Nayapul, you'll catch a car/jeep to Pokhara. The short drive will take you to the scenic city of Pokhara. One of the most popular tourist destinations in Nepal, Pokhara boasts wonderful activities ranging from boating, cycling, sightseeing, and bungee jump and paragliding for the adventure enthusiasts. Overnight stay at a hotel in Pokhara.

Day 19:Drive back to Kathmandu (6 hrs.).Farewell dinner with Frolic Adventure.

Today, you’ll drive from Pokhara to Kathmandu. While bidding adieu to Pokhara city, you’ll get the constant view of Annapurna I and Machhapuchhre at the distance. The drive may last around 6 hours and will take you through the swirling hill roads of Nepal. Once at Kathmandu, you’ll be escorted to your hotel. And, in the evening you will enjoy a farewell dinner with us. Overnight stay at a hotel in Kathmandu.

Day 20:Departure to the international airport for your final flight.

Today, our representative will drop you off to the airport. On the way, you can share your holiday experience and future travel plan with us. 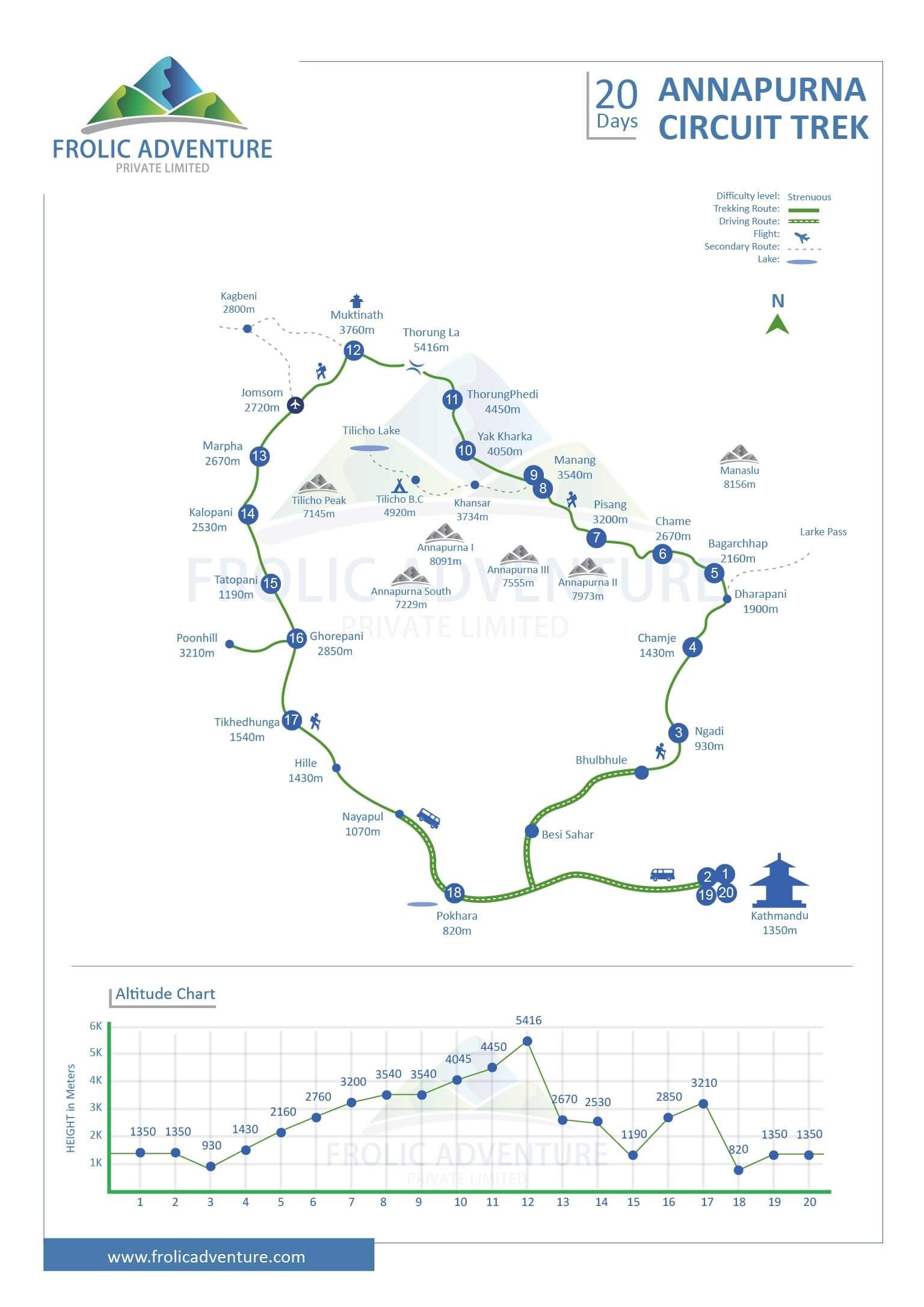