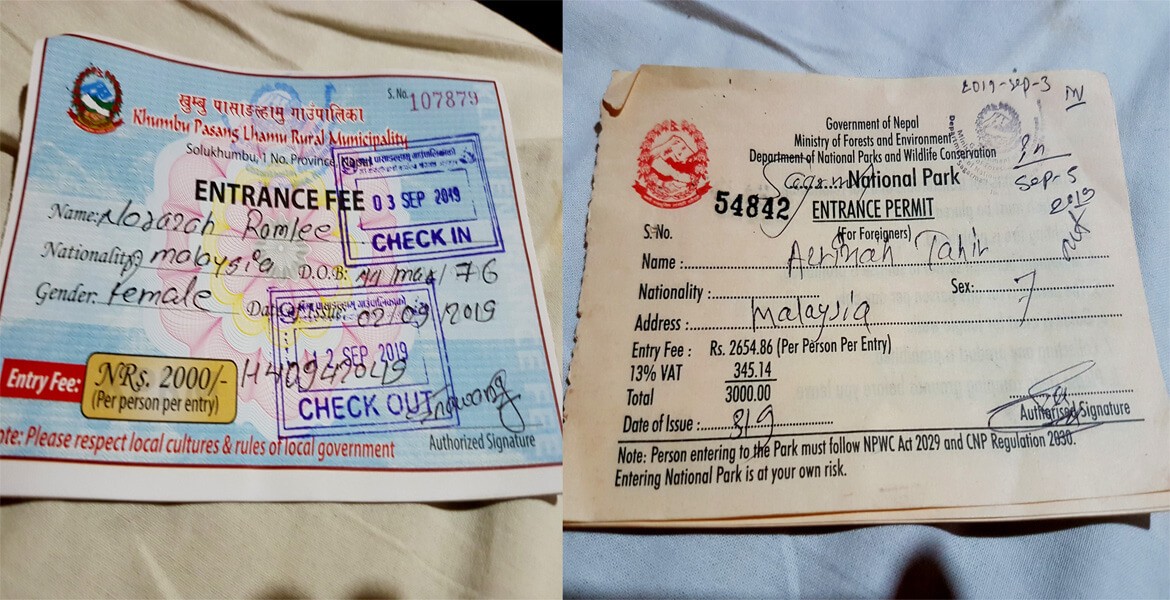 Nestled in the northeastern part of the country in the Himalayan region, Everest Base Camp Trek is a trekking program that leads you to the lap of the tallest peak in the world. It has been growing in popularity among trekkers and travellers all around the globe. Everest Base Camp is the most popular trekking destination in the world. It is an adventure of a lifetime, a journey to the world’s tallest peak- Mt. Everest. Being one of the most sought trekking programs, thousands of trekkers from all over the world come to accomplish this trek every year. Filled with mesmerizing features of the soaring peaks, Everest base camp is an unforgettable trip loaded with breathtaking views.

It is an adventurous trekking course that takes you to the elevation of 5,545m where you can see the majestic Everest right in front of your eyes. This trek also allows you to traverse through the lush valleys of the Khumbu region also known as the Everest region. With every step you take in the region, you will be able to witness some of the tallest peaks such as Lhotse, Nuptse, Cho-Oyu, Ama Dablam, Changtse, Pumori and Lobuche, etc.

The major attractions of this trek are the stunning mountain views, lush valleys, rare flora, fauna, and the unique Sherpa culture. The trails take you through the famous Namche Bazaar which is known as the gateway to the Himalayas. You will also pass through the green Sagarmatha National Park adorned with vibrant rhododendron flowers and dense subtropical forest. Rich in biodiversity, rare and endangered animals like red panda, snow leopard, musk deer, etc, can be found in this region.

As you start ascending higher, the greenery decreases and you are now surrounded by pristine glacial lakes and alluring mountain views. From the rewards provided by the Everest Base Camp Trek, this may sound hard and difficult for beginners. However, in reality, it is moderately difficult and anyone can do this trek. For its mostly uphill and downhill walks with plenty of acclimatization, you will not require much experience or physical fitness. But, you are advised to do a tad bit of preparation like cardiovascular activities and flexibility training. With many more attractions and features, Everest Base Camp Trek is worth a shot.

Permit to See These Everest Base Camp Trek Highlights

Trek Permit For This Itinerary

The grand journey to the lap of the world’s highest peaks starts with a thrilling flight to Lukla airport. The terrain beneath you gradually changes while your flight nears the small airport surrounded by green hills. Soon after the thrilling landing, you will trek to Phakding for approximately three hours.

After resting the night at Phakding on day one, you head towards Namche Bazaar. It can take up to six hours or more depending on your speed to reach Namche Bazaar. Here, you are highly recommended to spend an additional day for acclimatization. In Namche Bazaar, you can spend the day exploring the lush valley or do some last-minute shopping.

The next day you will now head to Tengboche. This part is where the difficulty in trekking rises. As you ascend to Tengboche, the greenery starts to decrease and the clear panoramic views come into sight. It takes almost five hours of walking to reach Tengboche.

From Tengboche, you will now head to Dingboche which is at an elevation of 4,410m. Again, you are recommended to spend an additional day at Dingboche for acclimatization. You can visit the monasteries or hike to the Chhukung valley for the day.

The next destination is Lobuche and now that you are travelling at 5,000m, the trek gets harder and harder. After spending the night at Lobuche, you will now head to Gorekshep. You will have to make it to Everest Base Camp and return to Gorekshep the same day. The whole trip for the day will take almost seven to eight hours of walking. Upon arriving at the base camp, you feel victorious as the mighty massifs surround you.

After spending the night at Gorekshep, you will now return via Kalapatthar. Here, you will be able to see the picturesque view of Everest, Ama Dablam, Cho-Oyu, etc. You will also be able to view the sun rising behind the Himalayas which will leave you in awe and amazement. After spending some time at Kalapatthar, from Gorekshep the destination for the day is Pheriche. You will spend the night at Pheriche and head out to Namche Bazaar and Lukla airport.

Finally, as your trek comes to an end, you return from Lukla airport to Kathmandu.

Base Camp Trek Permit and Cost 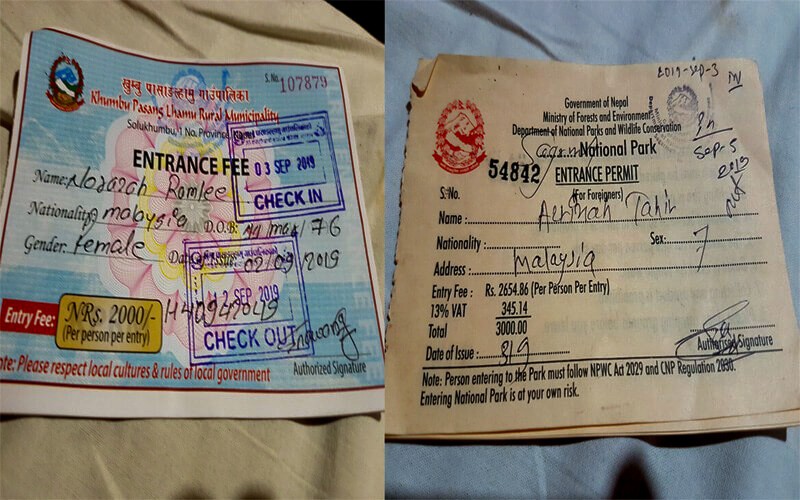 If you are planning for a trip to Everest base camp, there are different kinds of costs and permits that are involved. The majority of the cost involved will be for personal trekking equipment. Also, one kind of cost that will be involved in the Trekking permits. You will need three permits for the Everest base camp trek. They are described below-

This new permit cannot be received in Kathmandu, the local government in Khumbu directly collect NPR 2,000 per person from foreigners. This permit can be obtained at the Lukla airport.

If you are following the classic Jiri Everest Base Camp Trail, then you will obtain a permit in Shivalaya. You will also need to obtain an additional permit for Gaurishankar Conservation Area if you come through Jiri. This can cost you NPR 3,000.

Everest region is known for its finest tea houses and guesthouses along the trekking trails. There are abundant teahouses aligned beside the smooth trails. You will not have to worry about food while trekking in the Everest region. The teahouses here serve local Sherpa cuisines and Nepali cuisines as well. However, if you do not prefer local delicacies, they also provide western cuisines. Though the food may not be perfect, it won’t disappoint you.

It will be harder to find a variety of cuisines when you trek higher and higher. Some of the most loved Sherpa dishes by the trekkers are Rildo, momos, rice, curry, and butter tea. You will be able to eat and also catch up with other travellers just like you. This can also be an opportunity for you to learn about the Sherpa culture and way of life. 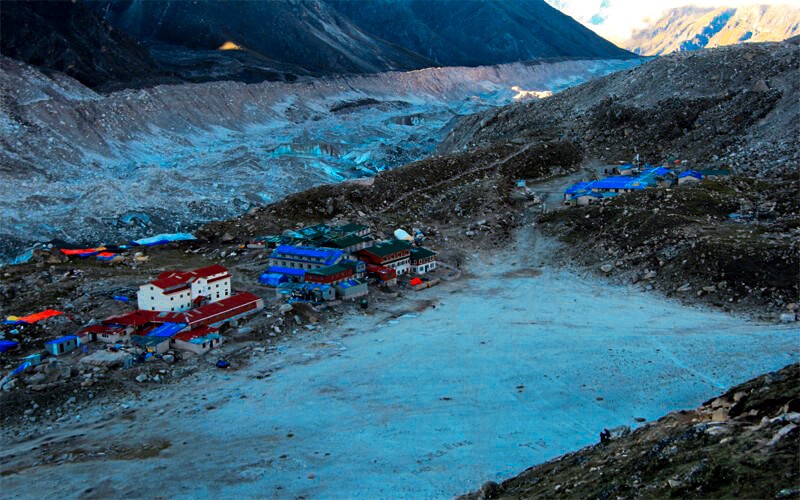 Last shelter on the Everest base camp trek

You are recommended to bring your sleeping bag as an extra blanket might cost you extra money.

Everest Base Camp Trek is a very challenging and demanding trek. One of the major reasons that make this trek more challenging and unpredictable is altitude sickness. Since Everest Base Camp is located at a high elevation and the trek takes place above 5,000m, high altitude sickness can happen to anyone. High altitude sickness, also known as acute mountain sickness, can occur to anyone who is at an elevation of 3,000m. This sickness occurs when your body receives less amount of oxygen. As you ascend higher, the oxygen gets thinner and thinner. For this, you will have to drink a lot of water and always keep a Diamox tablet beside you. The common symptoms of high altitude sickness are headache, lightheadedness, nausea, and dizziness.

Thousands and thousands of travellers visit Nepal just to accomplish the Everest base camp and the weather plays a vital role in the succession of this trek.

The weather and temperature of the Everest region are always unpredictable. The Everest base camp is really cold in December-January. This season is also known as 'off-season' and the temperature always drops to -18 degrees Celsius. So, only a few people dare to trek in this region during the winter season.

The best weather and temperature in the Everest region is during the spring and autumn season. These seasons are also picked out as the best season to explore the treks of the Everest region. During the spring and autumn, the weather is very pleasant and cool. The spring season, which is from February to May, is neither too hot nor too cold. You will be able to enjoy the panoramic view of the massifs without any unpredictable weather changes. Similarly, the autumn season gives off the same energy and weather as spring. Without sudden rain, blizzards and storms autumn provide you with clear and warm weather.

Detailed information on weather and temperature.

Lukla airport, also known as the Tenzing Hillary Airport, is the only airport in the Everest region. It is considered to be one of the smallest airports in the world. It is also surrounded by high peaks which makes it challenging for the aircraft to land easily. Owing to its demanding geographic structure and variable weather conditions, flight delays or cancellations are a common sight in Lukla. Adding to the difficult topography, adverse weather conditions like rainfall, storms, blizzards in the Everest region, etc. may lead to flight cancellations or delays. If you trek during the spring and autumn, the weather is dry and stable. So, there is less chance of your Lukla flight getting cancelled or delayed.

Trekking in the Everest region means spending time in one of the most remote regions in the world. While trekking in this region is not risky or dangerous, you should still be prepared to face unpredicted risks and challenges. Trekking is a physically demanding activity and poses some risk factors. So it would be better to be insured before venturing into the Everest base camp trek. Insurance is a must for trekkers travelling to the Everest base camp as even minor injuries like sprained ankles can cost a loss. Since this trek takes place in a rural region, hospitals are not available. You might need helicopter evacuation and it will cost a lot if you are not insured. If you are insured, you will not face any problems even if the helicopter evacuation is very costly and expensive.

Everest Base Camp Trek is truly an adventurous and marvellous trek offering you the best of Nepal. For its distance and high altitude, many people may find it challenging and hard. But there are various ways to do this trek and it all depends on how much time you can spare for this trip. The high elevation can be a problem and a major variable while trekking. So, you should do your research and come prepared before you start this journey. Following the proper guidelines needed for this trek will reward you with the best trekking experience in the Everest region. If you are truly a nature lover and trekking enthusiast, Everest Base Camp should be on your list to visit.