Toilets and Showers Facilities in Everest Base Camp Route 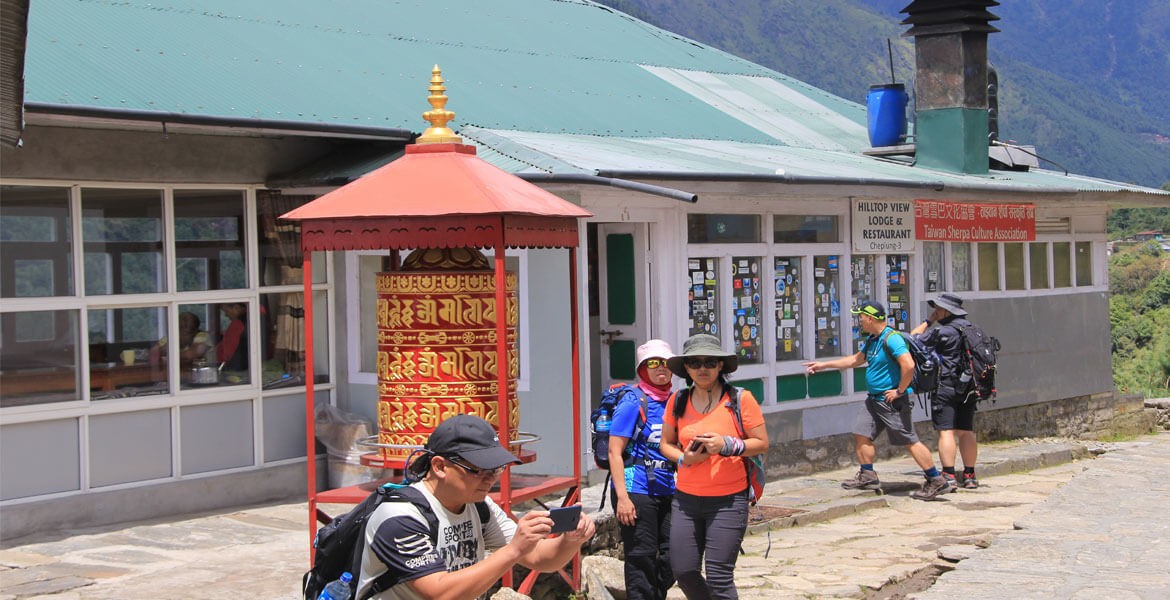 Lodge along the Everest base camp trek

Toilets and Showers Facilities in Everest Base Camp Route

So, we talk about toilets, showers and laundry services along the Everest base camp trekking trail in this post.

Toilets and Shower Along Everest Base Camp Trek

You might have heard from some people about the toilets or have seen some pictures shared on social platforms. You will see some basic toilets with a bunch of seats with a big hole and use the leaf to cover it. Yes, there are some of these types of toilets, but these are not for tourists.

We use nice lodges with clean accommodations and washrooms for our clients on the Everest base camp trek. All the guesthouses have toilets and showers indoors, and some of them also have attached bathrooms. But, don’t expect the toilets and bathroom as you have in your home.

The Everest region is a remote area, so it is better to bring toilet paper, wipers, sanitisers and other toiletries with you for the trek. You also need to bring the things for the shower like a quick drier towel, shampoo, soap and face washes.

In the lower region up to Tengboche, you will get western commodes but there are flat squat toilets above 4,00m of elevations in the guesthouses. Squat toilets might be completely different for you if you do not visit remort and mountain areas often. This kind of toilet can be an extra experience for you if you have not used it before. It also can be a bit difficult to use in a squat position rather than a sitting position. Some toilets may not have running tap water, but you see water in a bucket and use the manual flush. They also keep a bin for toilet paper inside the toilets.

It might be uncomfortable to use squat toilets for those people who have never been to rural areas and have never used these types of flat toilets. So, here are some tips on using squat toilets below:

There are hot shower facilities in every lodge along the way of the Everest base camp trek. You will have a proper hot shower in Lukla, Phakding and Namche Bazaar. There are mostly solar, electric and gas showers in these areas, but the guesthouses might provide hot bucket water for the shower after Namche Bazaar. Hot showers are not included in the room cost, so you need to pay extra if you would like to have a hot bath.

It will be the cold temperature in the Everest region, so taking showers every day may not be a smart idea. It is good to wipe with a wet tissue in the higher region above 4,000m during the Everest base camp trek.

Use Toilet and Shower Safely

If you are on an Everest base camp trek from November to early March, it might be icy surfaces inside the bathrooms. The ice makes it slippery, so step carefully when you enter the bathroom and put water to melt the ice first.

Probably, you will pack enough clothing for the trek. Taking lots of clothes can make an overload for the Lula flight. You might be looking for laundry service during the trek. There is a machine washing laundry service in Namche Bazaar. The lodge staffs also provide hand washing services somewhere, so you need to consult with your guide to talk about the laundry if you need it in some places.

You can also wash your light clothes and socks along the trek. Every guesthouse has a washing place close to the main yard. So you can do your laundry during your acclimatization rest day in Namche Bazaar and Dingboche.

The mountain region is a mainly rural area, so the Everest base camp route is the same. Do not expect luxurious toilets and perfect showers from the Everest base camp trekking region. The lodges may provide access to commodes toilets and proper showers, but they are not using those yet because of too cold temperatures. The shower pipes might not have running hot water due to freezing and commodes toilets also will have the problem if it gets ice in them.

Most trekkers don’t think of having a shower every day because of the cold, and it is also may not good for their health. Although the locals are trying their best for toilets and shower facilities in their guesthouses along the way to the Everest base camp.