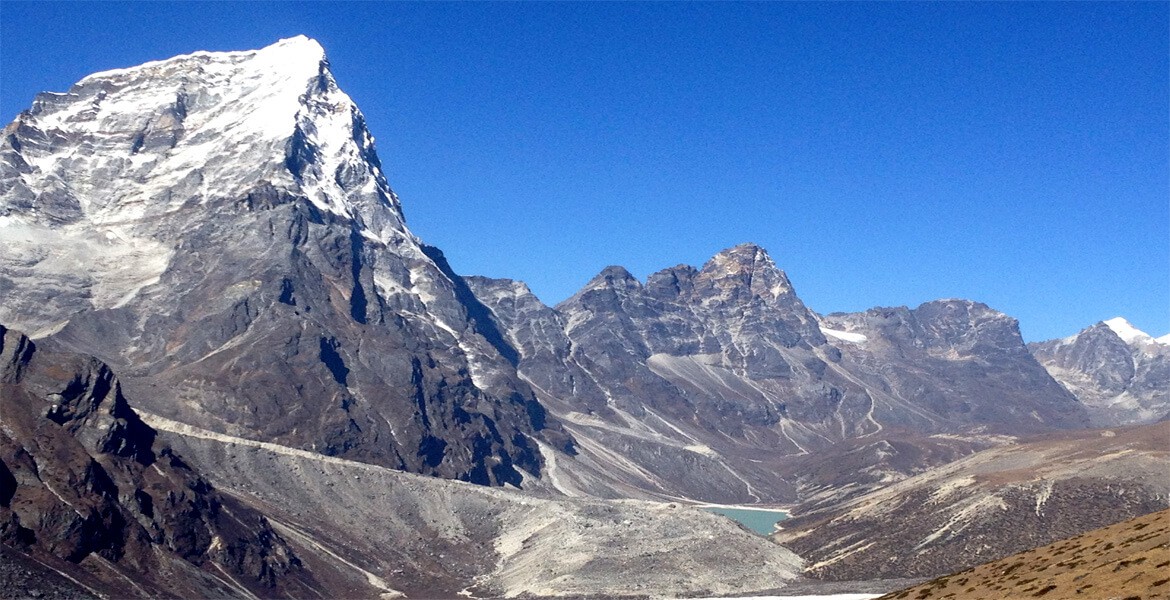 Everest region trekking is the most popular trekking among the trekkers since there are majestic mountains in the area. The Everest region is located in north-east Nepal, is not only a famous destination for tourists in Nepal for its scenic views of the highest peak of the world the -- Mt. Everest [8,848m]--but also other mountains stretched across as white shaped teeth. Besides, the mountains, the region is well known for the loyal and friendliness of its inhabitants.

Mt. Everest, the highest mountain in the world, is known as "Sagarmatha" [The goddess mother of the world) in Nepal. It has long been the greatest attraction for nature lovers and trekkers.

The Everest region is protected by the Sagarmatha National Park, established in 1976 covering an area of 1148 square kilometres. Throughout the trekking region, trekkers are overwhelmed with the views of unbelievable peaks, Buddhist monasteries, and friendly Sherpa villages. Similarly, the common wildlife in the park is -- Himalayan Tahr, Ghoral, Musk deer, Picks (mouse hare), weasel, jackal and other rarely seen animals are Himalayan black beer, wolf, lynx, and snow leopard. There are over 118 species of birds inhabiting the park, the common among them are the pheasant (Danphe), Blood pheasant, red-billed cough, yellow-billed cough, snow cock, snow pigeon, Himalayan Griffon and lammergeyer.

The geography of the Everest trekking area covers the rugged rocky valleys, alpine forests and meadows, neat Sherpa Villages, Glaciers and icefalls. The region is arguably the most famous trekking route in the world as there are the most breathtaking sceneries. The visitation at the lower elevation is dominated by pine and hemlock forest, while above 3500 meters the forest is dominated by silver fir, birch, rhododendron and juniper trees. Growing barley and potatoes and raising yaks are some of the notable occupations. The majority of young people in the region have engaged as mountaineering and trekking guides in the season.

Everest base camp trek begins with an adventure flight to Lukla from Kathmandu. Right after landing at the Lukla airport, the trekking journey starts going towards Phakding. After spending the first night in Phakding, the trek ascends ahead Namche Bazaar, Tengboche, Dingboche, Lobuche and Gorakshep before the base camp attempt.

Gokyo lake trek- Known also as the Gokyo valley trek is an alternative trek to the Everest base camp trek. Gokyo Ri trek is also about a similar time frame trek as the base camp. This trek has fewer trekkers compared to the basecamp side. But the view and attractions are lots different than the base camp side and even offer better views.

Gokyo lake trek also begins as the Everest base camp trek and goes on three days following the same trail. The trail to the Gokyo lake divides from Sanasa taking to the left following Dudhkoshi river valley. Musk deers, Himalayan Thar, and Himalayan Monal will be encouraging you to walk on high mountain lands along the way to the Gokyo valley.

Great mountain views from Gokyo Ri, visiting 5th lake and other tranquil lakes, and glaciers could be a lifetime experience Gokyo lake trek. The view from Gokyo Ri is even better than Kala Patthar's. You can see four high mountains above eight thousand meters such as Everest, Lhotse, Makalu and Cho-Oyu with hundreds of other big snow-capped mountains. If you are not thinking about the Everest base camp but would like to explore Everest Himalayas well, the Gokyo lake trek could be the best option. Chola pass trek covers Everest Base Camp and Gokyo lake trek. It has also known as the EBC Gokyo trek. You may do this trek either from Gokyo to EBC or Everest base camp to Gokyo. Visiting the base camp first and then trekking to Gokyo via Cho La pass is much easier than from the Gokyo side.

If you have around three more days from the regular base camp trek itinerary and are fit enough to cross the high passes, the Cho la pass trek is highly recommended.

The view from Renjo La top is fabulous. You can see all the beautiful mountains from the Everest Himalaya and Mt. Makalu from the top.

Three major high passes are Kongma La, Cho La and Renjo La. Trekkers should be physically fit and usual trekkers to the high Himalayan lands. It is the best option to explore the whole Everest Himalaya and region. Mt. Everest and Lhotse from Tengboche

It can be very cold during winter to trek to the base camp and other long Everest treks, but the Everest view trek is doable even during winter. Everest panorama trek goes up to Tengboche hill, which is the best hill station to see Mt. Amadablam. Mt. Amadablam is the most beautiful mountain in the Everest region.