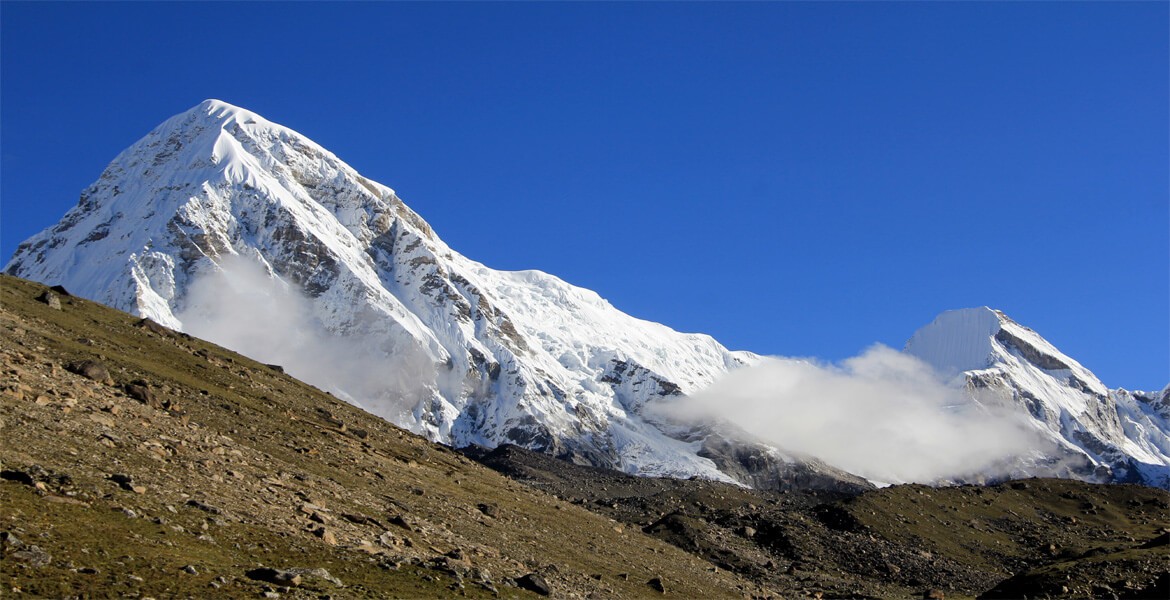 Located in the northeastern part of Nepal, Everest Base Camp Kalapatthar Trek is one moderate and classic trek of the Everest region. It is one of the most popular and adventurous trekking sites in the nation. Home to some of the tallest peaks in the world, trekking in the Everest region will not disappoint you.

About Everest Base Camp Kalapatthar Trek

Kalapatthar Trek is the best way to witness the mighty Everest from a closer distance. This trek offers an enduring experience of immense natural beauty and geological magnificence with spectacular views of Everest and other peaks. Everest Base Camp Kalapatthar Trek is a trek that leads you to the most sought-out viewpoint in the region. Thousands and thousands of travellers and trekking enthusiasts indulge in this trek every year, just to get the best view of the tallest peak. It is also considered that your trip to Everest Base Camp without climbing up to Kalapatthar is in vain.

Taking you up to the highest point of 5,545m, Kalapatthar Trek is a lifetime experience amongst trekkers. This trekking program offers you not only the panoramic view of the tallest mountain in the world- Everest, but also other peaks such as Lhotse, Nuptse, Cho-Oyu, Ama Dablam, Thamserku, Makalu, Island peak, etc, as well as Kalapatthar. The trails of this trekking course will lead you through the heart of the Himalayas.

With rugged and off beaten trails, this trek takes you through the dense green forest, ancient monasteries, stupas, pristine lakes, gushing waterfalls and unique Sherpa valleys of the Everest region. You will be passing through the protected area of Sagarmatha National Park where you will be able to witness some rare and endangered species such as Thar, Musk deer, red panda and snow leopard, etc. If you are traversing the Everest region, you should not miss out on the breathtaking view of the Everest massifs from Kalapatthar. With many more attractions, Everest Base Camp is worth a shot.

Day 10: Trek from Pheriche to Namche Bazaar for 6-7 hours.

Day 11: Trek from Namche Bazaar to Lukla. for 6 hours.

Day 12: Fly back to Kathmandu.

Journey to Everest Base Camp and Kala Patthar

Your grand journey to the lap of the world's tallest mountain Everest starts with a flight to Lukla. The 25 minute trip from Kathmandu to Lukla is considered one of the most thrilling parts of the trek. Landing in the narrow airport surrounded by the hills will give you an adrenaline rush. From here, the real trek towards the Everest base camp begins.

Thrilling flight to Lukla from Kathmandu for EBC Trek

Since Lukla airport is situated at 2800 meters, you will be descending towards Phakding which is at 2,610 meters. It will take approximately three hours for you to reach Phakding. After spending the night at Phakding, you will head towards Namche Bazaar.

Namche Bazaar is also known as the gateway to the Himalayas. Situated at an altitude of 3,441 meters, your trails are mostly uphill. It takes approximately six hours to reach Namche Bazaar and it could take more or less depending on your speed. You will be passing through several villages like Monjo and Jorsale. Monjo is also the entry point of Sagarmatha. After reaching the trading hub of Namche Bazaar, you will rest the night there.

For the next day, you will be spending an entire day at Namche Bazaar for the sole purpose of acclimatization. But you can wander around the village and explore the region. If you have some last-minute shopping to do, you can do it in Namche Bazaar. As you go higher, the number of shops keeps on decreasing.

From Tengboche, you will now be hiking towards Dingboche. Resting upon an elevation of 4,350 meters, you will be blessed with the scenic mountain views of Lhotse, Ama Dablam, and Island peak. You are recommended to spend an additional day in Dingboche for acclimatization. You can explore the summer valley or opt to hike to Nagarjuna. The hike may be steep and strenuous but you will be rewarded with awesome mountain views.

From Dingboche, you will now head to Lobuche which takes almost five hours to reach. You are now probably very excited about today, you will be seeing Mt. Everest very close. The Everest Base Camp is getting nearer and nearer as you trek towards the Everest base camp via Gorekshep. With Khumbu glacier to your right and snow-clad peaks on your left, your trek to the base camp will be one of the best days of your whole trip.

Everest Base Camp: "Your foot on the foot of the World's Highest Mountain"

Taking you almost eight hours of walk, you are now finally at Everest base camp. From here, your eyes are now blessed with a splendid view of the majestic Everest. After spending some time here you will now walk back to Gorekshep for the night. From Gorekshep, you will now be hiking to one of the gems of this trek- Kalapatthar.

One of the most popular viewpoints, here you will see a different view of Everest along with some other 20 peaks. This is the major highlight of the whole trip as you reach the highest point of this trek at 5,554 meters. The main reason to hike to Kalapatthar is that it is known to have the best view of Everest. You can also witness the glorious sun rising upon the icy peaks.

Back to Kathmandu After Visiting Kalapatthar

On the same day, you will be starting your journey back to Kathmandu. After spending some quality time at Kalapatthar, you will now make your way down to Pheriche. The total distance you will be covering is about 12 kilometres and the walk together is for 7 hours.

The trail from Namche Bazaar to Lukla airport is now a steep downhill of 8 hours. As you walk through the trails, you are accompanied by the sound of gushing Dudh Koshi. Upon arriving at Lukla airport, you will now be spending the night celebrating and relaxing. You are finally heading back to Kathmandu in the morning. Within 25 minutes, you will arrive at Kathmandu International Airport. You can either choose to spend some days in Kathmandu or return home tomorrow.

1. What is the elevation of the Everest Base Camp Kalapathhar Trek?

2. What is the best season for trekking in the Everest region?

The best season to do the Everest Base Camp Kalapatthar Trek is during the spring and autumn season. These seasons offer the best features of the Everest region. The spring season, which is from February-May, is neither too cold nor too hot and the trekking trails are vibrant with rhododendrons blooming everywhere. You will also witness the breathtaking view of Everest without any hurdles as the weather is mostly clear and cool. Also, during the autumn season, which is from August-November, the clear weather provides you with one of the best mountain views. As the rainy season ends, the weather is always stable and you will not have to worry about sudden rain, blizzards or storms.

3. Is there an age limit, how difficult is the Everest Base Camp Trek?

There are no age limits when it comes to Everest Base Camp as there are different trekking programs designed for any age limit. If you are travelling with children, you can opt for trekking programs that are suitable for children as well as adults. The trek to Everest Base Camp is not very difficult as it is relatively doable by anyone. With the amazing reward from the Everest base camp, you will be wondering if the trek is difficult or not. However, it is moderately difficult and you can do it with proper health and guidance.

4. Do you need prior trekking experiences and perfect fitness?

Trekking to Everest base camp can be a very challenging trek and you will not need great fitness or anything. However, you should be prepared before venturing into the Everest region. Since the Everest region is a high altitude trekking, it will be convenient if you have any prior trekking experiences. You are also recommended to do a tad bit of cardiovascular exercises and flexibility training. You should be in good shape if you are sick, you will not be able to enjoy this adventurous journey.

5. How is the food and accommodation service in the Everest region?

-You do not have to worry about the food services and accommodation services in the Everest region. All the treks in the Everest region are tea house friendly treks and you will find several tea houses on the trekking trails. Here, you will be able to taste the local delicacies of the Sherpa people. The salted butter tea here is loved by many travellers and trekkers. If the local delicacy is not to your palate then, you can opt for western cuisines. Although the food might not taste like a five-star hotel, it would not disappoint you. For the accommodation, you will find luxurious hotels to cheap guest houses. All the tea houses and guest houses provide standard beds and food services.

In conclusion, Everest Base Camp Kalapatthar Trek is truly an adventurous trek that provides you with one of the best views of the Everest massif. It is one of the most outstanding spots for adventure lovers. This trek is intended to meet the dream of many individuals experiencing the classic route to the world's highest mountain. It also provides you with the opportunity to experience the unique Sherpa culture and traditions. Moreover, this trek also offers you the chance to witness some of the highest glacial lakes in the world. Providing one of the most dramatic panoramic views of the Himalayas, Everest Base Camp Kalapatthar Trek should be on your list.