The Everest is not only a mountain so it is worshipped and respected as the mother of the earth by the name Chhomolongma. And a journey to the base camp is not only a trek. So it is like a journey to heaven with an incredible view. When Is The Best Time To Trek To Everest Base Camp

The spring season starts from March and stays until May. Spring is treated as one of the best seasons to trek to the Everest base camp. This time brings warm sunny days with a nice and clear view. The forest looks amazing with blooming colourful flowers all around in this time so this season is known as the king of the season.

The spring is a main season for the Everest expedition so you will encounter with the Everest climbers along the trek to the Everest base camp. There are lots of tents set up at the base camp so it looks like a small city at the bottom of the world’s highest mountain Everest.

The temperature will be warm and visibility will be nice and clear in this season but there should be some hailstone drops sometimes in the lower area and snowfall in higher elevation. Even if it hails or snows, the temperature still will be warm. Late May brings monsoon so it starts to be some rainy days.

Spring season starts from March bringing a warm temperature and keeps behind to cold temperature of winter. Trees from the forest, start having new leaves after old leaves fall from winter and start blooming colourful flowers including the Nepalese national flower rhododendron.

With pretty looking forest and incredibly clear view of the Himalaya, the month March should be one of the best months for the Everest base camp trek. Though, this month is a bit colder compared to April and May.

Trekkers can trek with light warm clothes in the spring season. The weather will be mostly sunny with a warm temperature and offers a spectacular view with a clear sky. 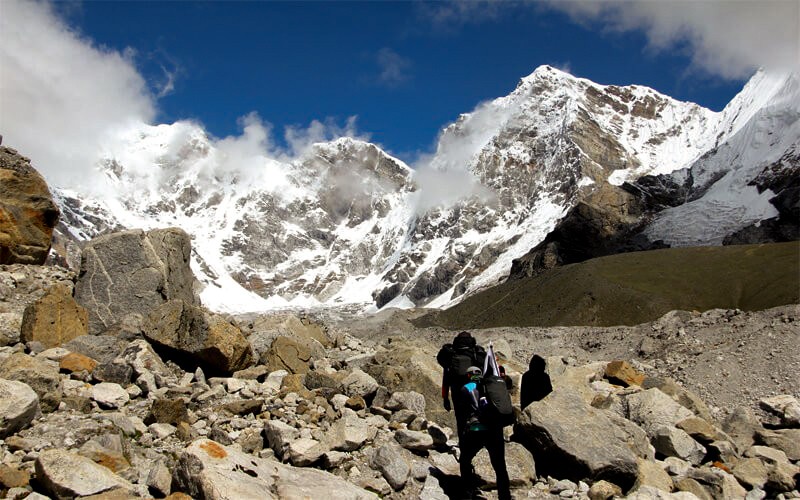 Crossing a glacier before reaching Gorakshep

The autumn is the main season for trekking in Nepal and also to the Everest base camp trek. There are bigger numbers of the trekkers in the autumn season compared to the spring season. Autumn starts right after monsoon so the rainy season clears all haze and brings clear visibility.

Autumn is not the warmest season but you feel brilliant temperature and find the great view all around. And it won’t be freezing as in winter at night in this season. The sky looks amazingly blue during the day and bright stars at night.

The autumn season starts from September and remains until November. Trekking before mid-September might not be the best time because there will be some rainy days. It may effect for Lukla flight and will be some cloudy days.

October and November are the best months to trek to the base camp with clear days but November starts bringing cold temperature and welcome winter from the next month. Everest base camp trek in December

Anyone can understand that the months from winter season are cold. Winter offers freezing months and icy surface on a wet floor.

The months December to February will be very cold in higher elevation and even in the capital city Kathmandu. And winter considered as the coldest season in Nepal.

Yet, the weather remains usually dry in winter so it still is a good season for the Everest base camp trek if you don’t mind the cold temperature. Then, you surely can do this trek with nice and warm equipment. You will find the best visibility in December that you might not have in other months.

Also if you don’t like crowed trail while you trek, this season might be a good option.

Winter season pasturing from December to February is controlled by the constant streams blow in the northern hemisphere going towards the south. This brings some changes like cold temperature, winds and snowfall in the Everest region.

The temperature during the day will be managed able but it will be freezing at night so it can be difficult to deal with. While trekking in winter is not the best season for the trekkers. But visitors who can digest the temperature, the view will be magnificent.

Everest view trek is the shortest trek in the Everest region. It is one week trek from Kathmandu to Kathmandu goes to Tengboche and come back after an amazing view of the Everest Himalaya and more. This trek can be done during the winter season. Everest base camp in summer

The summer season in Nepal starts from June and stays until August. This season is a monsoon season with lots of rain almost every day.

There are very fewer trekkers are hiking during the monsoon period because of poor visibility with clouds, lots of rain, muddy and slippery trekking trail.

Monsoon season is considered as an off-season for trekking in Nepal and to the Everest base camp. Although, there are some trekking routes that can be done in this season. Upper Mustang and Upper Dolpo are the optional trekking trail while monsoon period. These areas are known as the rain shadow region in Nepal.

Flying to Lukla might be affected to start the trek but walking from Jiri and Salleri with a drive and finish the trek to the same place having a long holiday can be an option of the Everest base camp trek. This is quite seasoned with not many other trekkers on the way during the trek in monsoon.

Other Treks In Everest Region

Gokyo valley trek also leads the same trail of the Everest base camp until Sanasa after Namche Bazaar then split left towards Dole passing Mong hill. You can see musk deer and the Nepalese national bird Himalayan Monal along the Gokyo lake trekking trail.

Following the same trails to the Everest base camp until Dingboche, the trail goes to Chhukung then pass Kongma La. You will reach Lobuche after this high pass and visit the base camp and Kalapatthar then pass Cho La to go to Gokyo valley. Exploring with beautiful Gokyo lakes and enjoying the view from Gokyo Ri, you go over Renjo La and reach Thame valley. Thame Valley is the most beautiful hidden valley in the Everest region then the trail joins in Namche Bazaar.

Cho La pass trek is a combined trek of the Everest base camp and the Gokyo valley trek. This trek can be done from either side as visiting Gokyo lake first then cross Cho La or base camp first. Crossing Cho La pass is much easier from the base camp side.

If you have around 2 or 3 days extra with Everest base camp trek, you can do this trek.

Besides these treks, Renjo La pass trek is also a nice trek in the Everest region trek. Everest panorama short trek is good for the people who have limited time and walking from Jiri or Salleri for a long Everest trek.

Major Festivals In The Everest Region

The Everest region is a land of the Sherpa people. They are practising Buddhism and celebrate different festivals according to their religion and culture. Encountering with these festivals and celebrating with locals will be a great experience for the travellers. This festival performed every year between mid- October and mid-November. So, the Mani Rimdu festival fixed according to the Tibetan Lunar calendar and announced the date by the head Lama of Tengboche monastery. Mani Rimdu festival celebrates with colour with cultural program. It is not famous only in this region and in Nepal. There are lots of foreigners come to enjoy the festival with their family, friends and beloved.

No doubt, the autumn season from September to November and spring season from March to May are the best time to trek to the Everest base camp trek.

Before planning a trek to the Everest base camp, the trekkers should be familiar with all kind of problem faced during the trek. An important matter knows about the effect and prevents altitude sickness.

This trek takes to the altitude of 5364m (Base camp) and 5550m (Kalapatthar) starting to trek from 2840m (Lukla). So keep in mind if you have enough days for the altitude practice during the trek.

Check the weather and temperature before going to this trek and be prepared to face all the basic problems. And check all the information about the Everest base camp trek that is on our website.