Trek to Everest Base Camp in March 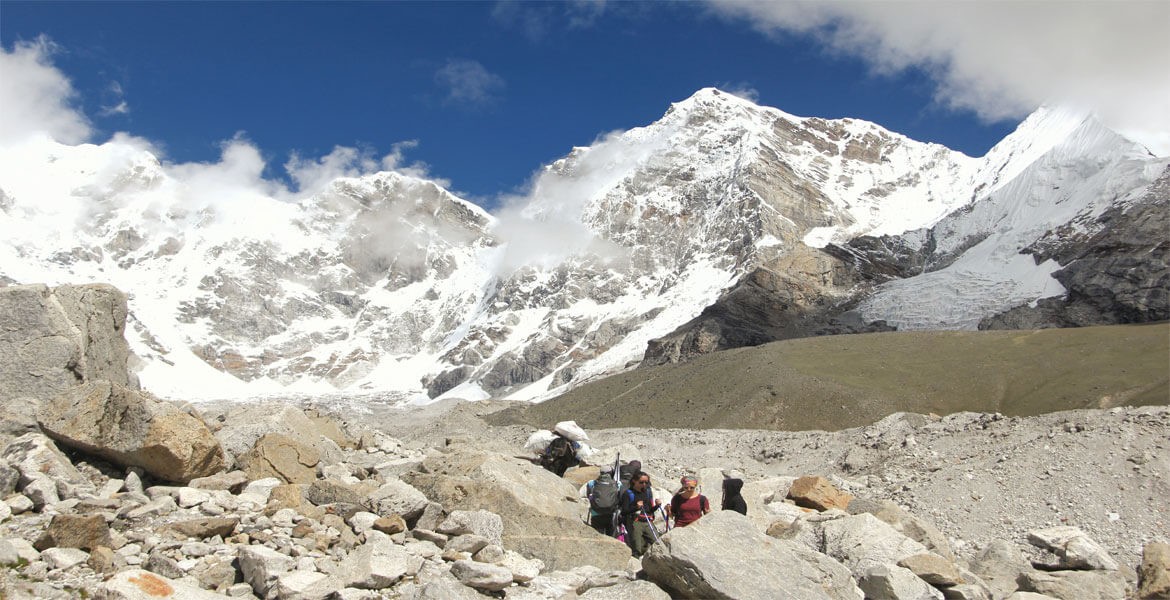 Everest base camp trek in March

Trek to Everest Base Camp in March

March is the first month of the spring season. The spring is the second busy trekking season in Nepal, so it is a perfect time to trek to the Everest base camp in March. It starts getting warm in the mountain, so there will be a tolerable temperature in the Everest region in March. Although, the first week of this month will be cold and will drop a few snowfalls sometimes. Everest Base Camp Weather and Temperature in March

March starts the dry season, so it starts haze in the lower region. But, it will be clear up in the mountain. So, You will have a wonderful time on the Everest base camp trek in March. It will be a clear blue sky with shiny bright mountains in March. About a half an hour adventurous short scenic flight to Lukla, and a landing at an airport with a short runway can be a great experience from the Everest base camp trek in March.

The trekking trail remains inside the Sagarmatha national park, which is a natural UNESCO world heritage site in Nepal. You can see green vegetation, wildlife, waterfalls, streams, rivers, blooming rhododendron and other natural resources during the EBC trek in March.

Sherpa is the original residence of the Khumbu region. They are famous as mountain legends in the world. You can see different beautiful Sherpa towns with typical buildings along the Everest base camp trek in March.

Buddhist Monasteries and Other Monuments

There are numerous historic ancient Buddhist monasteries on the EBC route. Tengboche monastery is one of the best to visit during the EBC trek in March. Besides the monasteries, there are lots of other Buddhist monuments in the Everest region. You pass some Mane walls, Mani rocks, prayer flags, prayer wheels and stupas along the way.

There are several unblocking viewpoints along the base camp trail, from where you can see magnificent mountain views during the March Everest base camp trek. You have the first look at the world’s highest mountain from Top Danda right before reaching Namche Bazaar on the second day of the trek. Everest view hotel and Nangkar-Tsang hill are the other beautiful viewpoints before the base camp.

You can see superb views of Thamserku, Khangteka, Kusum Kangaroo, Amadablam, Peak 38, Nuptse, Lhotse, Everest and Tawache from the Everest view hotel. Nangkar-Tsang hill is only the place from where you can see Nepal’s 4th highest mountain Makalu during the Everest base camp trek in March.

Kalapatthar is the best hill station to see the nearest view of Mt. Everest. Besides a close-angle view of Everest, you can see 360° Everest Himalayas from the Kalapatthar.

Everest Base Camp with Colourful Tents

Spring is the climbing festival, so lots of climbers summit Everest in spring. You can see lots of colourful tents in March, which are set up for the summiteers. The base camp in March looks like a mini mountain city with lights in the evening. The massive Khumbu icefall looks amazing from here, which is crossed by the climbers before reaching camp I from the base camp.

There are a few hundred climbers and famous climbing leaders on the way. You can meet them and share your Everest experience with them during the March EBC trek.

You walk through beautiful valleys to reach the base camp. First of all, you follow Dudhkoshi valley from Phakding up to Phunkitengka and then follow Imja valley after Tengboche until Dingboche. After Dingboche village, you head towards the Khumbu valley. The first valley is in the lower region with lots of trees, but the upper two valleys are open and above the tree line. So you can see all the time high snow-capped mountains from the upper valleys.

Rewards of Everest Base Camp Trek in March 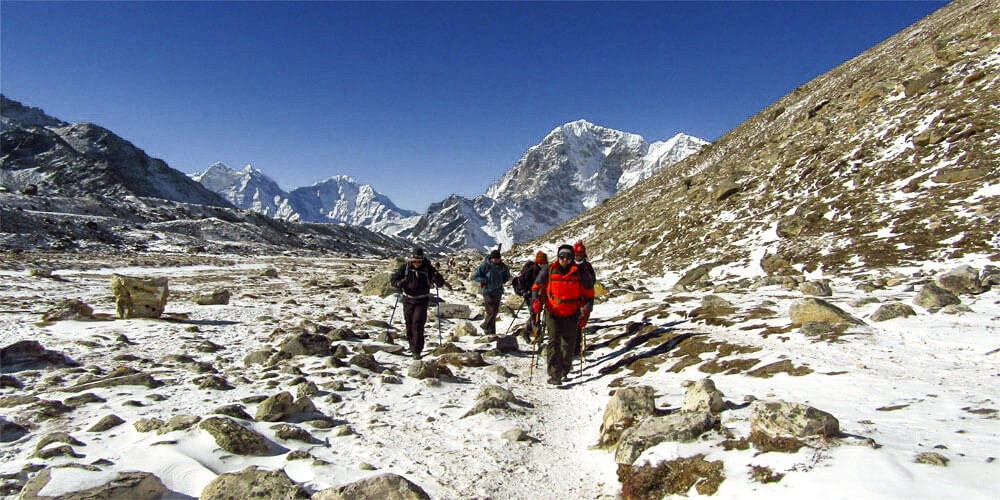 Trekkers on the Everest trail

It will be crystal clear weather in the Everest region in March, so you can beautiful views at this time. The mountains look bright from the viewpoints and also from the walking trail.

There will be blooming flowers in the forest and close to the walking trail in March. Lots of colourful flowers including the Nepali national flower rhododendron decorate the forest in the Everest region at this time.

It won’t be cloudy and rainy days in March, so there will be fewer chances of the Lukla flight cancellation at this time. You can get a regularly scheduled flight, but it might be a bit windy during the day.

It is a busy trekking season, so there are lots of trekkers on the Everest base camp trekking trail in March. You can meet many friendly people from different countries and share your experience with them.

There might be some challenges during the EBC trek in March. But, it may not be a serious difficulty. Altitude sickness, accommodation, flight to Lukla, traffic and more challenges, that you might face during the March Everest base camp trek.

Difficulties to Get Earlier Flight to Lukla

It will be windy days in the last hours of the day in March, so the Lukla flight can be affected or wobble during the flight time if it is a late schedule. It may be dusty while walking on the Everest base camp trail in March.

Some Snowfalls and Hails Drop

There might be some snowfalls in the higher region and hails drop in lower areas in March. Snowfalls can be any time of the day but hail drops in the late hours during the day mostly.

There are so many trekkers on the trail because of the high season, so the trail will be crowded with lots of people. Lots supply needed for many people at this time, so you see so many porters, yak, Jokpe and mules for the supplies. They might make the walking trail more crowdy. The crowd can make the walking hours longer.

Accommodation Can be Occupied

There are hundreds of trekkers every day on the Everest base camp trail in March, so it can be difficult to get accommodation in some places. Tengboche, Lobuche and Gorakshep have limited lodges, so accommodations might be occupied in these places quickly.

Altitude sickness can be a serious challenge in the Everest base camp trek in March. Altitude sickness is caused by less oxygen in the air and high atmospheric pressure at high altitudes. It can be very dangerous, but it is not a sudden thing. You will know the symptoms earlier. It does not affect all trekkers, and might not be a serious problem if you be careful.

Equipment for Everest Base Camp Trek in March 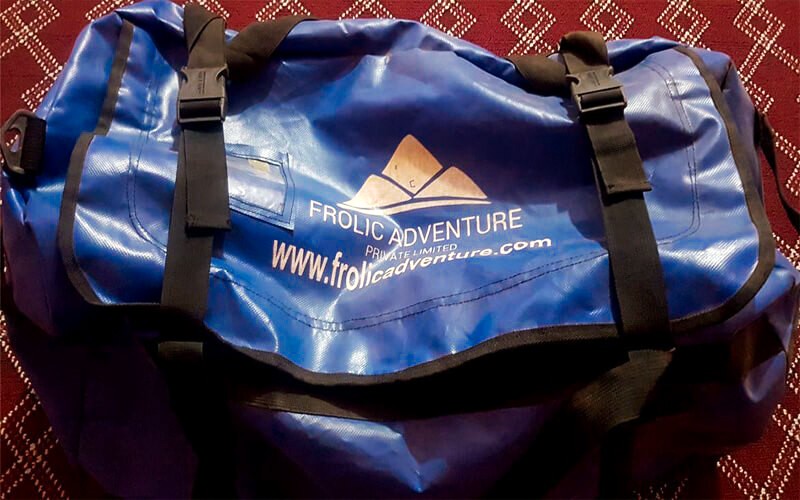 Main bag for the trekking equipment

Everest base camp trek in March will be tolerable temperature, but there will be cold at night and morning in the Everest region. You need to have warm trekking gear and other essentials for a trek in March to the EBC.

Other Available Trekking Trails in Everest Region for March

High passes treks such as the Everest high pass, Cho La pass and Renjo La pass might have lots of snow at the beginning of March. So, it can be slightly difficult to cross, but the last week of this month should not be a problem.

Gokyo valley trek in March can be an alternative trek if you do not like a big crowd on the base camp side. The Gokyo valley trekking can be done on similar days as the EBC. You can enjoy the views of beautiful lakes, glaciers, valleys and stunning Everest Himalayas from this region.

If you do not have enough time for the base camp or are scared of high altitude, but are interested to see the world’s highest mountain, you can go for the Everest view trek. The Everest panorama trek up to Tengboche is the shortest trekking package in the Everest region for March. You can see magnificent views of Everest, Nuptse, Lhotse, peak 38, Amadablam and other high mountains from this trek.

A short trek to the Everest base camp is for 8 or 9 days, which you can do in March. The helicopter return trek is the shortest package to the EBC in March. You follow the same itinerary as the regular one from Lukla to the base camp, then fly out from Gorakshep directly to Kathmandu on a helicopter after visiting Kalapatthar.

March is the first month of the spring season and it is a perfect time to trek to the Everest base camp. Clear weather and favourable temperature are the best part of this month to visit the EBC. Blooming flowers makes it more beautiful in the region in March. The decorated base camp with lots of colourful tents looks more attractive than normal at this time, so the Everest base camp trek in March can be a lifetime adventure experience for you. Please feel free to contact us if you have any queries about the trip.