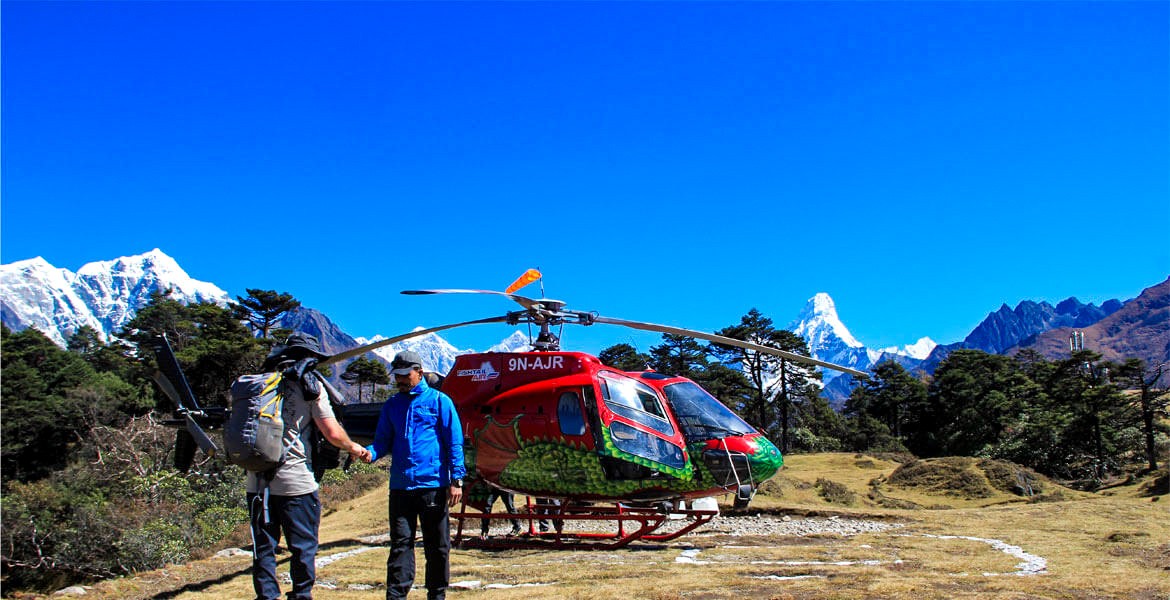 The Everest base camp helicopter tour with landing is a tilled mountain flight trip from Kathmandu. It has several landing spots at vantage viewpoints from where you can see superb views of the high mountains of the Everest Himalayas.

Lukla is the first landing of the Mt.Everest base camp Heli tour after taking off from Kathmandu airport. It takes around 45 minutes flight, where you see beautiful landscapes, valleys, traditional villages and stunning mountains like Manaslu, Ganesh Himal, Langtang, Gauri Shankar, and Jugal including Tibetan mountain Sisapangma (above 8000m).

There is a wide helipad in Lukla with several helicopter landing spaces. The helicopter lands for 10-15 minutes to fill the fuel that needs to fly higher. You will see Tenzin-Hilary airport here, which is a very famous airport as one of the most dangerous airports in the world. It has a short and craggy runway. Lots of base camp trekkers begin their walking journey for the Everest base camp trek by landing at this airport.

You will fly toward Pheriche from Lukla for the second stop. It takes another half an hour's flight next. The helicopter flies through the Dudhkoshi river and Khumbu valleys now. You will fly over beautiful Sherpa settlements, where you see colorful buildings. The places you cross are Phakding, Namche Bazaar, Tengboche and Pangboche. You can also see historic Buddhist monasteries and other monuments along the flight time.

You will have 5 people in one helicopter from Kathmandu until landing number 2 in Pheriche and split the group into two different suttles to keep load balance. Now, the first suttle flies with 2 or 3 people leaving some people in Pheriche and flying toward Kalapatthar. And rest wait for the second suttle in this place.

Point to Note: You will land in an open place and there is no place to escape from the cold wind. Pheriche is a windy valley, so wear warm clothes and a wind stopper. Kalapatthar landing while the EBC helicopter tour is one of the best spots, from where you can see stunning mountain views. You will feel like you are standing in a piece of heaven seeing such unreal mountain views and the nearest look of Mt.Everest. You will defiantly feel worthwhile paying for this scenic flight tour to the base camp once you land at Kalapatthar. You see Mt.Everest very close with sharp-shaped Nuptse, Lhotse, Lola, Changatse, Khumbutse, Lingtren, Pyramid-shaped Pumori and lots of other tall mountains. After spending 10-15 minutes at Kalapatthar and taking some beautiful pictures, you fly over the base camp and Khumbu glacier and see the Khumbu ice fall. Now you fly back to Pheriche and the people who had dropped off on the way up do the same.

Point to Note: It will be cold and windy in Kalapatthar, so you need to wear a warm jacket, winter hat, winter gloves and sunglasses.

This 4th landing back in Pheriche during the Mt. Everest helicopter tour is to change the suttle. The people who dropped off on the way up to the base camp and Kalapatthar, do the same activities as the people from the first suttle did. You can see lots of yaks around this valley with stunning views of Mt. Ama Dablam, Cholatse and Taboche very close to you while you land in Pheriche for changing suttle. After finishing two different suttles from Pheriche, all of you who flew from Kathmandu together will fly back to the Everest view hotel for the 5th landing of the EBC helicopter tour. You will have a longer break at this spot because you will have a warm breakfast in this mountain luxury hotel.

The Everest view hotel on Syangboche hill is a stunning viewpoint, so you can see amazing views of Taboche, Everest, Nuptse, Lhotse, Amadablam, Khangteka and Thamserku from the terrace of the hotel. After enjoying such wonderful views and breakfast. You will meet lots of Everest base camp trekkers here. The hikers visit this place during their acclimatization practice hike from Namche Bazaar on the rest day while they are on the base camp trek.

Note: Do not forget to take some Nepalese cash with you for the breakfast and national park permit.

You will land in Lukla after taking off from the Everest view hotel for refueling again. You will see the most beautiful Sherpa town in the Everest region Namche right after taking off while flying toward Lukla. It is the final landing spot of the Everest base camp helicopter tour with landing then you will fly to Kathmandu with having an amazing Everest experience for another 45 minutes.

The Everest base camp helicopter flight tour has 6 landings in 4 places, those are in Lukla, Pheriche, Kalapatthar and Syangboche Everest view hotel after taking off and before landing back in Kathmandu airport. You can enjoy excessively divine Himalayan views from Syangboche and Kalapatthar landings and certainly be delighted by this Everest Heli tour with landing trip.